What is Piste X Code ?

We all know that 🏂 skiing and ⛷ snowboarding and other downhill mountain sports carry risk. Perhaps we’ve had an accident on the pistes or we know someone that has been injured.

The nature of 🗻 winter piste sports ie downhill, slippery and varied terrain (some bumps where we’re not expecting them!), weather changing visibility, crowded pistes, far too speedy skiers & snowboarders, mean that there is always a danger for us all when we are out there!

However, the start to this particular ski season in our local Haute Savoie & Savoie mountains, after a season when most of us were not on the pistes last year due to pandemic closures, has been a tragic one: two deaths in the space of a week due to collisions caused by speed and loss of control (and one a 5 year old girl) on blue pistes, and in the following weeks further deaths . . . As parents, our hearts are heavy, and we’re angry, as these tragedies could have been avoided.

In the wake of the two first accidents, two mothers from Morzine decided that enough was enough, and immediately got to work on a campaign to minimise risk out on our mountain pistes, and to try to make skiing safer for us all. They were inspired by a similar campaign visible in the USA and Canada.

Their campaign has been put together quickly, so that it could be launched within this season, and here are parts of it:

A friendly mascot – Monty the Yeti

Monty the Yeti is the adorable mascot telling you in a friendly way how to behave out there on the pistes! The choice of Monty is a clever one, as it will hopefully be less didactic an approach for those less willing to be told what to do!

A video launched the campaign . . .

There are many posters reminding us of things that perhaps we think we already know . . . 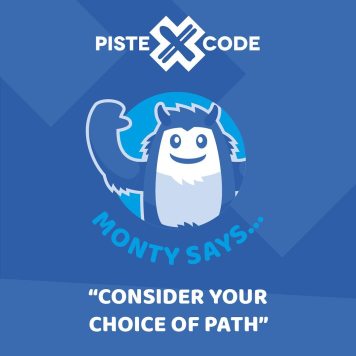 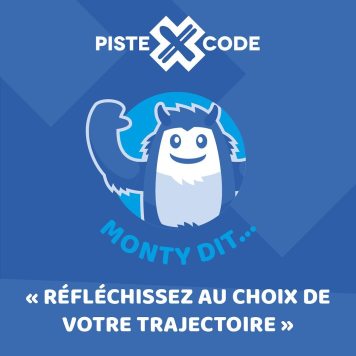 Who is behind Piste X Code ?

Piste X Code was the fruit of the quick reaction and amazing work of two Morzine mothers : Lou from ALP: Alpine Lifestyle and Performance and Amie from Morzine Source Magazine. Like many parents, these ladies were shocked and heartbroken by the January tragedies on the pistes.

They very quickly channeled this heartbreak into action . . .

” We’ll be shamelessly banging on about our Piste X Code launch ALL WEEK, because everyone who sets foot in the mountains this winter should revisit the rules of the piste. Honestly, doesn’t matter if you’ve been snowboarding or skiing for years, doesn’t matter how much safety kit you’re wearing, doesn’t matter if you only cruise green runs. We all need reminding. The campaign launches Friday, we’re backed by loads of local ski schools, funded by loads of local businesses and we’ve brought in the big guns for our launch video. ”

Planning of the campaign started at the end of January, and within a couple of weeks they launched their campaign on the 4th February 2022. This was just two weeks ago, and the campaign already has 900+ Facebook followers and nearly 800 Instagram followers.

How can you share the Piste X Code message ?

We can all do our bit to share the Piste X Code message!

Talk about the Piste X Code, discuss it, share the posters on social media, and talk to your children about it; the younger we can learn about piste safety and a responsible attitidue the better.

And if you can help with funding, knowledge or distribution, then contact the ladies at : hello@pistexcode.org