a 14th century medieval fishing village, located on the southern shores of the

Lac Léman. Known as « la perle du Léman » and classified as one of the « plus beaux villages de la France » (see here), with its narrow streets filled with pretty stone buildings, their wooden balconies overflowing with

flowers, Yvoire attracts a fair number of tourists, especially over

French lake is the largest fresh water lake in western Europe and here are some figures:

Rhône river is the main tributary of

Lac Léman, releasing 8 billion m3 of water per year into the lake!

. . . and this excellent lakeside location did not escape the notice of Comte Amédée V Le Grand (1249-1323), who in 1306 decided to fortify this small peninsula (presqu’île) with

an impenetrable castle and defensive walls, during the delphino-savoyarde war. During the Middle Ages, Yvoire found itself at war with the French, the Bernese, the Genevois, as well as the Maisons de Faucigny, du Dauphiné and Savoie. From its peninsula location, Yvoire could monitor navigation and control the lakeside route from Geneva to the Haute Vallée de la Rhône and to Italy. The village emerged unscathed from the wars of the Middle Ages, however it suffered greatly during assaults from Geneva and the French at the end of the 16th century, when

the castle was burned down. For the next 350 years, the castle remained uninhabited as the village lost its military importance;

Yvoire in the 1950s: tourism and flowers – Yvoire became a touristic destination in the 20th century . . . In addition, it became

a village of flowers! The first prize received was in 1959 –

What to see and visit in Yvoire

Yvoire is a pedestrian village, truly made for wandering, but it is still worth having a look at

the maps dotted around town, to get your bearings, and to make sure that you don’t miss any of the main sights!

Throughout Yvoire, one can still see the vestiges of the Middle Age fortifications: castle, archways and ramparts.

Yvoire: a village of stone houses and flowers – due to its marvellous flower displays, Yvoire has been awarded the prestigious « 4 fleurs », and as you wander through town, you’ll get to see the pretty stone houses with flowering wisteria and the wooden balconies, home to potted geraniums . . .

Yvoire has one main street – la grande rue – and this runs between the two fortified gates, and from it, 3 perpendicular streets descend to the place du Thay and to the lake: la rue de l’Eglise, la rue des boulangers and la rue des jardins. The rue de la Liberté and the rue du Lac were opened with the gardens of the castle in the 19th century.

La Porte de Nernier and La Porte de Rovorée (archway entrances) – to get a real feel for its history, the best way to enter Yvoire is through one of its main archways . . . The Porte de Rovorée is the entrance from the Place de la Mairie (where you’ll find the

WC and there is

a cash dispenser at La Poste). You’ll enter through the Porte de Nernier if you park in the

Parking des Mollards or the

Château d’Yvoire – built in the 14th century by Comte Amédée V Le Grand, the castle was ravaged by fire in 1591, and it remained uninhabited until it was rebuilt as we see it today in the 20th century. Félix Bouvier d’Yvoire undertook several interior and exterior renovations, including the building of the roof and the corner watchtowers in 1939.

You’ll not get to visit inside

Yvoire’s beautiful castle, at it has been private property since the 17th century! But you’ll get to view it from lots of different angles on your stroll through town.

Le Jardin des Cinq Sens – created about 25 years ago, these

pretty walled gardens were inspired by the poetic ambience of medieval gardens and their labyrinths. The gardens are divided into themed sections based on the fives senses. There is a special quizz available for children: the bee

Méliflor accompanies children 6 to 11 years, and the herbalist Floritou guides the older 12 to 14 year olds. 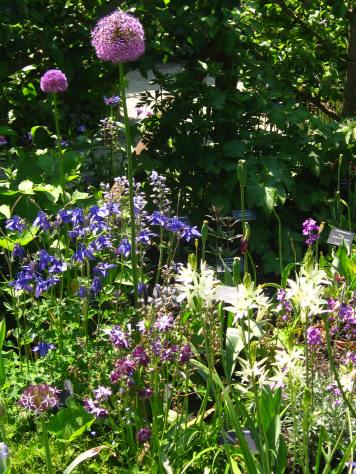 church, named after Saint Pancras (the patron saint of children) probably dates back to the 11th century, and you’ll keep getting glimpses of the church’s bell tower as you wander through town. The bell tower was originally built between 1856 and 1858, and its bulbous design was typical of late 19th Savoyard religious architecture. Originally covered in iron, it was restored and covered in stainless steel and gold leaf in 1989, to deal with rusting issues. Nowadays, it shines brightly in the sun, like a lighthouse upon Lac Léman. The interior of the church was renovated in 2012. 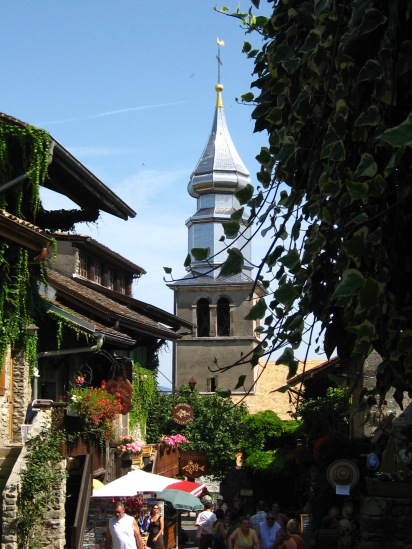 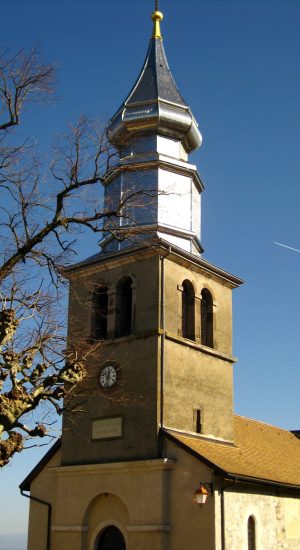 Port des Pêcheurs – this is the old port, and you can head down here to watch

the swans, or walk out onto the wooden jetties (note: be careful here with small children!). Note that you cannot get to the larger

Port de Plaisance from here; you’ll have to head back up and around the gardens to get there!

Port de Plaisance – the bigger boats will be moored in this port, and you’ll also find the docking area for the

Gare Lacustre d’Yvoire (CGN), for boat trips on the lake and across to

Nyon and Geneva, in Switzerland.

The quai is a great place for a stroll, and you’ll find a couple of restaurants here too.

artwork over the summer months.

The main specialities of this lakeside village are – of course – based around the fish from the lake, which find an ideal habitat in this cold and deep lake:

Crépy is a local white wine produced in the Chablais, near Douvaine, which is not far from Yvoire.

In a normal busy tourist season, you’ll find some higher-end restaurants, either overlooking the village or right by the lake . . . and lots of mid-range and takeaway options too.

There are also plenty of places to

picnic in Yvoire – you could opt for the grass (take a rug!) by the Port de Plaisance (you’ll also find a small playground here), or you might find a bench available . . . Alternatively, you’ll find picnic tables in the grassy park located next to Parking de la Cité Médiévale;

Where to stroll or bike ride

You can have a decent buggy stroll through the streets of medieval Yvoire (the steeper streets head down to the lake; don’t let go!), and along the quai of the Port de Plaisance, where you will also find a small playground on the grassy verge. You can exit Yvoire via this grassy knole, but this is not possible with a buggy, as there are steps. 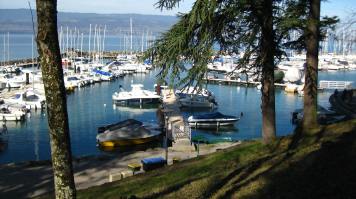 Another stroll could take you through the grassy park next to the Parking du Cité. 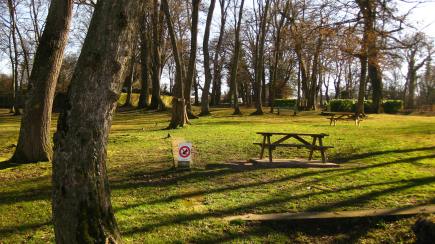 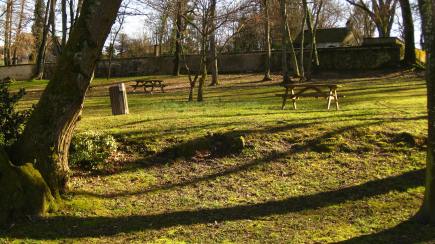 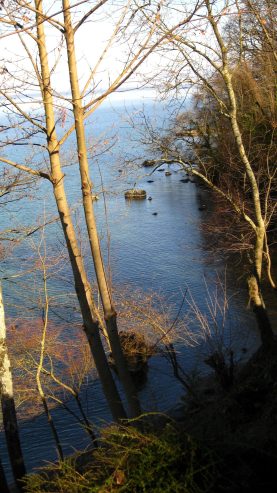 If you are searching for a longer buggy stroll, then you can take the Voie Verte (for

Domaine de Rovorée – La Châtaignière – this is located 1.5 km east of the town, and will take you 20 to 30 mins to walk.

Another option is to rent bikes (or bring them with you), and cycle between Yvoire and the 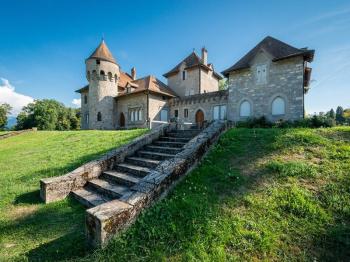 Parade Vénétienne – this carnaval parade normally takes place for carnaval in May . . . 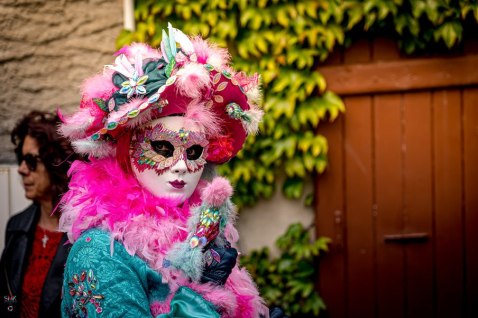 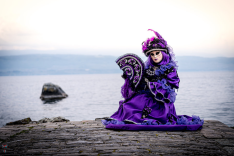 winter lights – Yvoire is often heaving with busloads of tourists over the spring and summer months, but if you visit in autumn or winter, you’ll find a much quieter village. Over the winter holidays, you might even get to experience

the Christmas lights, if you are there late enough! 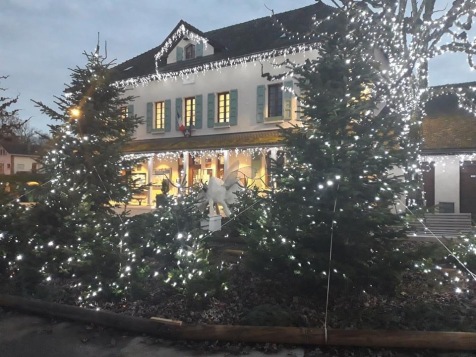 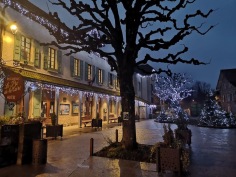 natural ice sculptures, but this is

a phenomenon that hits

Lac Léman every few years. These photos date from 2005 (photos by Pierre Alexandre, http://www.randos-montblanc.com), and in 2011 it was repeated . . . 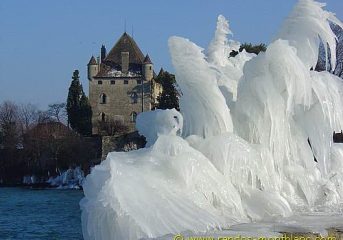 Nernier – this medieval village is the forgotten little brother of Yvoire. In fact, blink as you drive past the subtle route leading there, and you’ll miss it! Absolutely lovely in summer, Mary Shelley, inspired by the lake, wrote a few pages of Frankenstein while sojourning here.

Excenevex plage – if you are visiting Yvoire over the summer months, and you need a swim or a paddle . . . or during another season for that matter, you might want to head to

Lac Léman, and it extends across 24 hectares (with 1,2km of coastline).

Le Domaine de Rovorée – La Châtaignière is not a landscaped urban park, but rather a natural area with:

centuries-old chestnut trees and ancient wooded areas bordering the lake shore, tufa resurgences, meadows, views across the lake and vestiges of the medieval stronghold of Le Rovorée. You can walk along the marked routes with explanatory panels, perfect for a family stroll. You’ll find here lots of biodiversity: around

29 species of butterflies and

The mansion of La Châtaignière, renovated in 2007, offers

a temporary exhibition each year from June to October.

Getting there and parking

⇒ from the Pays du Mont-Blanc: calculate une bonne 1h from Sallanches or 1h20 from Chamonix, to get to Yvoire, via the autoroute A40 (sortie 15 Vallée Verte) . . . then follow direction Thonon-Evian until Douvaine, and from here: follow D60, towards Messery, and then D25, towards Yvoire;

⇒ from Geneva: you can take the scenic lakeside road, or the quicker D1005!

train: from Thonon and Geneva;

and by boat: in season, there is a regular boat service from the

Swiss side of the lake, from Nyon and Genève / ⇒ more information here;

where to park – most are municipal car parks, some with payment at the caisse automatique, some with horodateurs (you’ll need to display ticket in car):