In March 2020, the week before life was to change across the world due to Covid-19, a friend and I had a super morning in Chamonix: we had been invited to try out the 🛷 snooc au ❄ Domaine des Planards! At the time, the ❄ Domaine des Planards was the only ski station 🗻 au Pays du Mont-Blanc set up to use it safely.

What is a snooc, I hear you cry? A snooc is essentially a sledge (in the style of the old paret or modern yooner), set on one ski blade (patin). You use your arms and hands to steer, and feet to brake.

Who is the snooc for? You have to be 10+ years to rent out the snooc (this is the recommended age for being able to understand and control the equipment). It is for skiers, non-skiers, and in its rando version, for those wanting a fun descent after a snow-shoe outing! I tested out the snooc with a friend who has MS – the fact that she could sit down for the descent, was a welcome respite from the skiing she finds more tiring.

With ski stations still shut until at least February this year (except for ski clubs!), now could be the ideal time to try out the snooc – FUN guaranteed!

[ disclaimer and copyright : my friend and I were offered our passes at the ❄ Domaine des Planards, and we were given a short lesson on how to use the snooc, and then we had a couple of hours of fun. All opinions, however, remain our own. Thank you to Nickie Bell for being my companion for the snooc trial, and for the use of your photos and video ©! ]

Story of the snooc, paret and yooner

Broadly speaking, the snooc was inspired by the yooner, which was – in turn – inspired by the ancestral paret. All are a form of monoluge – that is, a sledge on one blade (patin).

a bit of history and terminology: 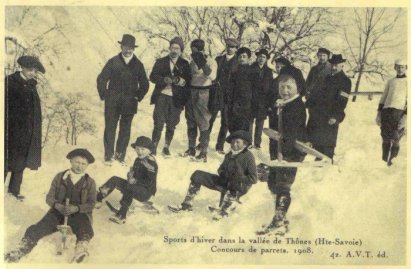 le yooner – the yooner was inspired by the paret . . . it needed a few changes to get it ready for use of the ski pistes. Unlike a traditional sledge (the traditional wooden version, with two patins, or the more modern plastic versions), you can use the edge of the one blade for control, and you can control your speed with your feet, and even stop in the middle of a steep slope;

le snooc – the snooc (developed in France) was also inspired by the ancestral paret, with a longer blade than the yooner. It was also developed in a rando (touring) form, to allow for wider use in the mountains;

There are two types of snooc: the snooc dh (downhill) and the snooc touring (touring version);

The snooc dh can be rented and used in various partner ski stations across the Alps.

The snooc touring enables you to explore the mountains in wintertime, in a different way. It is light and it is extremely easy to learn how to use it (10 minutes should suffice!). You head off as if on a ski touring expedition, on two separate skis (135cm long) with skins, and once on the summit, you alter the equipment, to become a snooc dh, and you come back down the mountain on the one blade. Essentially, this activity, is a combination of snow-shoeing, ski rando and sledging! It is appropriate for both skiers and non-skiers.

Nickie and I were greeted very warmly at the ❄ Domaine des Planards for our trial of the snooc. (I had already discussed with the staff that my friend had MS, and whether this would be a suitable activity for her).

🛷 meet & greet and trial run on the snooc piste . . . we were given a detailed explanations about the snooc, its conception, its uses . . . We were taught how to steer (with one hand on the handle, the other in the snow), how to stop (feet in the snow and lean back), and how to use the téléski and chairlift with the snooc . . . and then we headed of to try it out! While we were given the explanation, an older couple came to hear about the snooc . . . they were hoping to give it a go that afternoon!

🛷 trial run on the mini piste – after the initial explanation, we had a trial run on the snooc, down the small slope set up especially for it, to make sure we had understood the instructions, were competent and could turn and stop properly! The ❄ Domaine des Planards staff would not let us loose on our own, until we could prove our basic skills! Thankfully we passed this test, and moved on to the next challenge!

🛷 trial run on the Téléski du Grépon . . . and down the green piste . . . the snooc team designed an interesting attachment for the snooc, which was devised to work well with the téléski! We were well looked after by the friendly pisteur here, and had a couple of easy runs on the green slope, building up our confidence!

🛷 a solo run (or three!) – once we had proved our skill at getting down a green piste, and felt confident, we were let loose on our own on the blue piste, which we shared with the odd skier . . . For this, we took the télésiège, carrying our snooc with us (with an attachment, so that it cannot fall!). 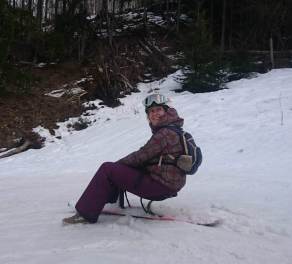 View of the woods from the blue piste, Domaine des Planards © montblancfamilyfun.com

We had an absolutely brilliant time, trying out the snooc. A lot of laughter was involved! It was the perfect activity to have done shortly before confinement hit our ski stations!

However, we did wish that we had brought spare clothing for afterwards! When using a snooc, you really use your feet for braking and your hands for steering (one in the snow with each turn!), so your boots (and socks!) and gloves end up soaking wet after a couple of hours!

So, do remember spare socks and gloves (even perhaps a change of shoes/boots and trousers too!) for after your snooc session.

A baptême session will introduce you to the basics of the snooc dh, and you can rent out the gear (for both snooc dh and snooc touring at ❄ Les Planards. You can also privatise the remontées mécaniques for a corporate function (when Covid is no longer ruling our world!).

The ❄ Domaine des Planards is an ideal spot to learn the rudiments of the snooc, as this small ski station is located near the centre of Chamonix, is accessible by bus and train, and has a large car park too!

There are beginner slopes and téléskis, and then the four-seater chairlift takes you up to an altitude of 1249m, the start of a long blue run. There are several snow cannons in place, to ensure good snow cover all season!

price: you’ll find a full list of the current prices for the snooc aux Planards here;

There is currently a special deal au ❄ Domaine des Planards: 1 descent on the all-year luge and one descent snooc for 15€ (afternoons from 13h30);