I first got really up close and personal with 🌻 Vincent Van Gogh (1853-1890), his artistic genius and his personal demons, when I studied him for part of my GCSE art class (eek, 30 years ago!) . . . I made my dad sit on a decrepit old garden chair in our 🌸 springtime suburban garden, and then I painted him Van Gogh-style, with ☕️ a cup of tea in hand! I often wondered what 🌻 Van Gogh would have made of that painting! And I sometimes wonder where it is now? (My dad and stepmum’s attic I imagine; my dad is a bit of a hoarder!).

Fast forward 8 years, and I began to work as a tour leader for American high school students and their teachers (quite daunting, as at this stage in life, the history and art history teachers had far better knowledge than I, a mere university language student!). On the agenda, for me working in 🇫🇷 France, were several 🌻 Van Gogh destinations :

And so why teach or learn about 🌻 Van Gogh during this springtime 🏡 home confinement?

2) Vincent spent time confined indoors during his time in a mental asylum in the south of France; and yet he still found inspiration to create 🖼 paintings!

Virtually penniless during his life as a painter, after his death at the very young age of 37 years, the 🇳🇱 Dutch-born 🌻 Vincent would later find fame all over the world! This was largely due to to the work of his sister-in-law Jo, who sold nearly 200 of his paintings between 1891 and 1925.

After a couple of years in Paris with his brother Theo, and introduced to several 🎨 influential artists, Vincent felt in need of sun, warmth and colour . . . and so he headed to Provence for the spring of 1888: to the city of Arles . . . there he was repeatedly inspired by 🌸 spring blossoms (Almond branch in a glass, 1888; Almond Blossom, 1890):

Here also, his painter friend Gauguin visited him, and it is claimed that during an argument with him, that 🌻 Van Gogh cut off his own ear . . .

Ater the ear-cutting episode, Vincent spent time in an asylum in Saint-Rémy-de-Provence (an interesting article from The Guardian here; only, perhaps, for parents and much older children!) . . . Bad physical and mental health shadowed 🌻 Van Gogh throughout his life, and there are many theories about the problems that led to his presumed suicide: bipolar disorder (manic episodes countered by depressive episodes and anxiety), borderline personality disorder, schizoaffective disorder, hallucinations and nightmares, epilepsy . . . perhaps exacerbated by lead poisoning, the excessive drinking of absinthe.

🌻 Vincent van Gogh moved to Auvers-sur-Oise (30km from Paris, this town had already attracted several other painters for sojourns: Pissaro, Cézanne) to be close to his beloved brother Theo in 1890 . . . Here he was befriended by Dr Gachet, a doctor and art collector who lived nearby . . . seventy days after his arrival in Auvers-sur-Oise, having painted a further 78 paintings, he shot himself in the stomach and died 2 days later (see here for more information).

👩‍🏫 Some ideas for teaching your children about Vincent van Gogh 👩‍🏫

As I was preparing this article, I found so many fabulous resources available on the internet!

This was my favourite of 🎬  the three videos that I showed the boys, and I think also the favourite of my 9 year old! Informative, full of historical facts and geography, but also colourful and varied.

🎬  Biography for Kids (FreeSchool): Vincent van Gogh for Children – short, but informative, with passages to read and some geography;

🎬  Art with Mati & Dada: Van Gogh – this short animation is aimed at younger children. Of the 3 videos I showed my boys, my younger son (6 years) liked this one the best! It reminded me of the fact that I used to tease my American students as they called 🌻 Van Gogh Van Go, as Mati refers to 🌻 Van Gogh as Van Go in this film!

[ more about Art with Mati & Dada: Welcome to the wonderful world of Mati and Dada, where learning meets creativity and imagination. Seven year old Mati, a cheerful young girl with a zesty passion for art,is magically transported into the lives of great artists by her eccentric sidekick, Dada. Together these two friends go on exciting adventures, solving little mysteries and getting caught up in bumbling confusions, en route to learning about art from the masters. Created by: Giovanna Bo and Augusta Eniti co-produced by Achtoons and Rai Fiction ]

Perhaps you have some books about painters or specifically about 🌻 Van Gogh in your home? I found some old ones from my teaching days, and so I showed the boys some of his paintings. You could also try these online sites:

[ good to know: you can purchase books from the Van Gogh Museum shop online (there may be current restrictions, so please do check!) ]

🖼 Van Gogh Museum (Amsterdam) – despite a visit to Amsterdam back in my student days, I have never been to the 🖼 Van Gogh Museum there! This museum, set across 4 floors, hosts the largest collection of 🖼 artworks by 🌻 Van Gogh, including over 200 paintings, 500 drawings and personal letters . . . I was excited to learn that I could visit this museum virtually with 🎨 Google Arts&Culture . . .

🎨 Google Arts&Culture also allows you to zoom in on particular paintings, like the Terrace of a café at night (1888, The Kröller-Müller Museum, Netherlands) – see here . . . or learn about the books that Vincent read and the love letters he wrote . . .

With 🎨 Google Arts&Culture, you can also visit:

And, when home confinement ends, and you are allowed to visit museums with your body and mind, you might like to keep an eye on the exhibitions at these Culturespaces interactive museums (all located in interesting disused spaces) in 🇫🇷 France, to see if Vincent pays them another visit:

🎨 Van Gogh Museum website: you can print off lots of different pictures to colour in, directly from the museum’s website; see here ; 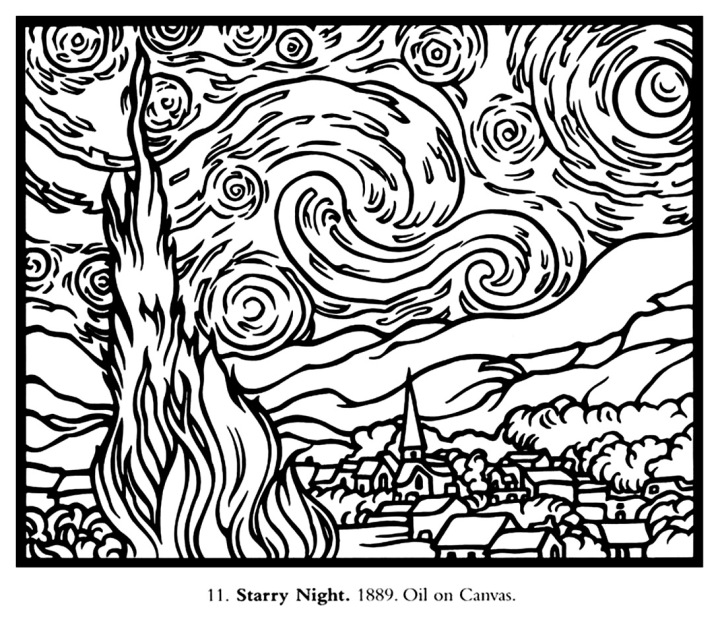 🎨 for older children: How to Paint Van Gogh’s Sunflowers in 6 Minutes (Learn How 2):

And from the National Gallery:

🎼 Have you ever listened to the song Starry Starry Night (originally called as Vincent) by Don Maclean (1971) ? / read more about the inspiration for the song here . . .

4 thoughts on “ART HISTORY LESSON – teaching your children about VINCENT van GOGH from your home!”