During the 2019 Toussaint holidays, MBFF was invited to test out the ⛷ new indoor ski centre in Passy: Ski Indoor 4810! The boys were really excited to dig out their 🎿 ski boots, helmets and gloves ahead of the official ski season, and to try out something so novel! Being a pretty mediocre skier myself, I was somewhat more apprehensive, but I was certainly intrigued to find out more about indoor skiing à la 2020! 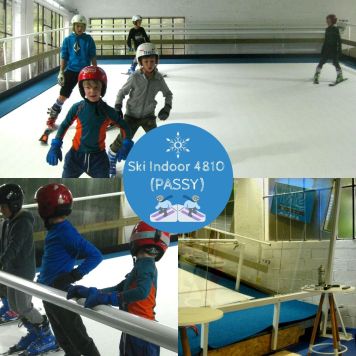 The team behind ⛷ Ski Indoor 4810 want you to be able ☔️ to ski whatever the weather, and to perfect your technique while you are there!

The idea is NOT to replace outdoor skiing on majestic pistes; it is seen, instead, as a complement;

This relatively NEW concept of indoor skiing was pioneered in 🇳🇱 The Netherlands, as we know a very FLAT corner of the world! 🇳🇱 The Netherlands is also home to ⛷ SnowWorld Landgraaf, the largest indoor ski village in Europe (with artificially produced snow, 5 slopes and a chairlift!), and so it would seem only natural that an innovative indoor ski centre would also take shape in this country!

So what exactly is ⛷ Ski Indoor 4810 and similar indoor ski centres? Just imagine an indoor running machine, just in a version XXL, and ingeniously adapted to skiing! The indoor ski carpets are made out of a white synthetic material, which allows the skis to slide easily, and it is possible to alter the % slope of the tapis and also its speed, to adapt it to the level required and the exercises being taught and practised!

This was the first design of indoor ski tapis, which allows for a super swift change of dénivelé (% slope); the maximum tilt can be reached in just 8 seconds! 4 people can use this tapis at the same time. This tapis is equipped with 3 cameras (front-facing, profile and bird’s eye view), and so you can either rewatch your session sur place or take home a USB key in order to study your technique at home.

While we were at ⛷ Ski Indoor 4810, we got to watch a youngster practising his slalom technique; I was riveted!

This is the larger tapis of the two available at ⛷ Ski Indoor 4910, and it is unique in Europe: 7m wide and 11m long, with a maximum capacity for 9 people to ski at the same time! It is equipped with a wide view HD camera.

⛷ Ski Indoor 4810 attracts a mix of the general public and ski clubs, ski instructors and professionals:

I really had no idea what to expect of our visit to ⛷ Ski Indoor 4810; I couldn’t quite grasp the concept, even after watching the video of a ski session there . . . and actually, I don’t think you can quite grasp the concept unless you experience it yourself! Perhaps some of you tried out skiing at a British artificial ski slope in the 1980s, to prepare you for that Continental ski trip? Remember the rough texture of the slope, nothing like snow? Well, take that image out of your head entirely, as ⛷ Ski Indoor 4810 is truly nothing like that!

During our visit to ⛷ Ski Indoor 4810, we did the equivalent of the family Tribu package – this is a good way for families to discover the centre (over the space of an hour, 1 to 4 people spend 30 minutes skiing: each session is followed by a 15 minute break, to allow the other group the same experience, so you take your time on the tapis in turns).

We were met at the door by Marie, who explained a bit about the centre, its origins, the technology . . . and then she allowed us time to get prepared (we had been asked to bring 🎿 ski boots, helmets, gloves, long-sleeved tops and comfortable trousers; the skis are provided, as the centre needs to make sure that they are not too sharp or waxed!) . . .

You need to arrive 15 minutes ahead of your slot, giving you time to get ready! 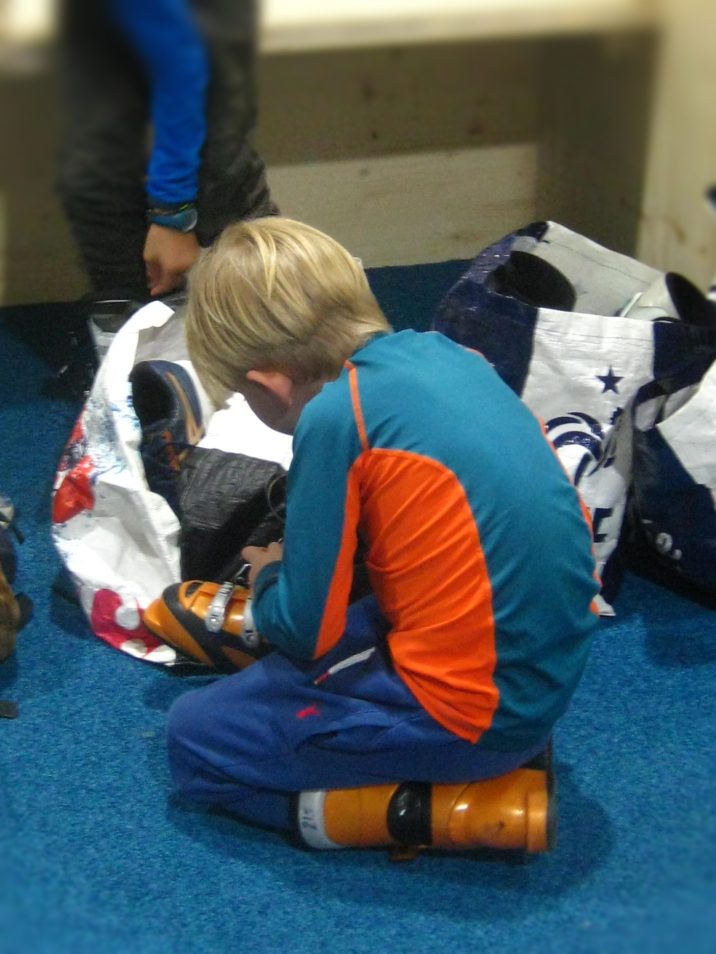 getting started and understanding the tapis . . .

The boys were the first to have their turn on the Tapis XXL . . . First of all, they had to understand how the tapis functioned and to grasp how they themselves moved on it! At the base of the tapis is a bar, and the exercises started here . . .

How does one move to the top of the tapis? When you get into the chasse-neige (snowplough) position, you head backwards up the slope, and then to head back down you straighten up into parallel position. Got it? During the first 15 minute slot, you have to feel the slope and your movement on it; it takes a while (it was difficult for my little 5 year old to understand the concept, but he was very valiant in the face of a few falls!).

Once the young crew got used to the technology, they then began to do exercises: snowplough, parallel . . .

And then it was the turn of the 3 adults, me included! Wow, it was bizarre! It took me quite some time to understand how to move on the tapis and then I had to concentrate on my technique (which definitely needs work; SNOW is way more forgiving!). After 15 minutes, I was exhausted and definitely ready to let the boys have their second turn!

My littlest got some one-on-one tuition from a great teacher. He really got him to focus on his snowplough (and was very sweet with him when his lips began to wobble after a fall).

The opinion of a moniteur de ski ESF (ski instructor)

The concept of ⛷ Ski Indoor 4810, being relatively new, is novel for ski instructors as well as for the general public, and several were invited in these last weeks to come and try out the equipment. Family friend and moniteur de ski in Megève, R. Monget, headed there with his kids (who are keen and fabulous little skiers and belong to a ski club!) . . . I was interested in what he thought of his experience:

He said that the first 15 minutes on the tapis were surprenants (surprising): getting used to the technology and moving on the tapis. Overall he sees enormous potential for perfecting ski technique at this local centre: the tapis allows for intense concentration (in my case, intense exhaustion!), permitting you to work on technique and style. He commented that from the point of view of a moniteur de ski, it will be fabulous to be able to correct a student in the here and now; that the interaction between student and teacher will be hugely constructive.

An old metallurgic factory was renovated and used to house this indoor ski centre . . . I personally loved the juxtaposition of old and new, and found it positive that the ski centre opted to adapt an old building, rather than build new premises.

how to book: if you fancy trying out this novel indoor ski centre, then head to the website to read a bit more about it and to book. Alternatively, you can give them a call with any special requests (the tribu family package costs 50€ and you get 2x 15 minutes of skiing, with a 15 break in between each session) / book here;

🚗 getting there: just 3 minutes from Super U Passy! / ⇒ see here;